Summary of The Rise and Decline of the State 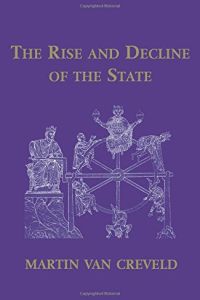 In this comprehensive history of the modern state, author Martin Van Creveld weaves together disparate threads and illuminates hidden connections in forceful, energetic language. Thus, his book is both scholarly and entertaining. Van Creveld takes a generally dim view of governments and the state. The greater the state’s power, the more he regards it as a monstrosity, and he’s not shy about saying so. The anti-government political right will like this book, but Van Creveld’s greatest contempt is reserved for nationalism, militarism and the state at war, which ought to entertain the left. He sees the state as a dubious, archaic institution and, as his narrative shows, his position transcends notions of conservative and liberal. Readers are likely to think of their nations differently after reading this book, which getabstract.com recommends primarily to students of politics and government and policy makers.

Martin Van Creveld is a professor in the Department of History at the Hebrew University in Jerusalem. His previous books include Supplying War, Fighting Power, Command in War, Technology and War, and The Transformation of War.

The state has been defined many ways, but the definition adopted here is that the state is an abstract entity, separate from both the rulers and the ruled, including both and standing over both. In this sense, the state is a corporation, like a university, trade union or church. The state reserves certain functions to itself alone, and it exercises those functions in a specified, exclusive territory. This concept of a state is actually a fairly recent invention.

Before the State: Prehistory to AD 1300

Before the rise of the state, humans were governed in one of four ways: by tribes without rulers, by tribes with rulers, in city-states or by empires both strong and weak. With each succeeding level of complexity, the government acquired more power, including powers of taxation, and with that power, the government also took on more privilege.

Of these forms, only the empire was capable of growing to any great size, and it often did so, in every part of the world. Like tribal chiefs, emperors owed their positions to a divine connection, and were often considered gods. Rule was strictly personal; the emperor was the government. All emperors...