Summary of The Rise and Fall of American Growth 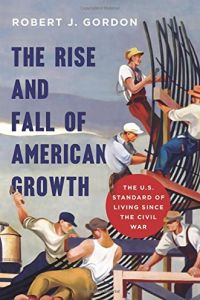 In the early 21st century, the pace of US innovation remains hectic in communications, entertainment and information technology. Yet economic output per person is declining as Americans age, and income inequality, educational limitations and US government debt plague the economy. Current slow rates of growth in US labor productivity and economic output can’t compare with the rapid advancements the country enjoyed from 1870 to 1970. Economics professor Robert J. Gordon describes this “special century” – when the electric light, the internal combustion engine, indoor plumbing and the telephone changed virtually every aspect of daily life – in great color and detail, though he sets out to offer few policy prescriptions for improving growth today. getAbstract recommends Gordon’s well-researched statistical gold mine as a valuable economic history lesson for students, professors and investors.

Robert J. Gordon is a professor at Northwestern University. His books include Productivity Growth, Inflation and Employment and Macroeconomics.

Revolutionary inventions and discoveries during the century from 1870 to 1970 produced an unrepeatable surge in the US standard of living, as measured by economic output per person. Since 1970, output per capita has grown at a much slower pace.

Gross domestic product (GDP), which shows total economic activity, is a flawed guide to historic changes in the standard of living. For “real GDP per person,” refer to inflation-adjusted GDP divided by the population. Though countries around the world use this measure, even real GDP per capita significantly understates the increases in the US standard of living in the 100 years that ended in 1970. The quantitative calculation of GDP excludes some contributors to the quality of American life. Consider the invention of electric light in 1879: Previously, candles and kerosene lamps illuminated American homes. GDP can’t measure the impact of electric light – the elimination of smoke and odor, and the reduced risk of accidental fires – on living standards.

In 1870, most people lived in the rural countryside. Americans produced a large share of their food and apparel...

The Master Switch
9
The Third Revolution
8
The Tyranny of Metrics
8
How Population Change Will Transform Our World
8
Rule Makers, Rule Breakers
8
Global Inequality
9