Summary of The Road to 5G Networks

OECD, 2019
This abstract builds on "The Road to 5G Networks" (2019), https://doi.org/10.1787/20716826 The opinions expressed and arguments employed herein do not necessarily reflect the official views of the OECD or of the governments of its Member countries.

The much-anticipated 5G revolution is imminent. Stakeholders worldwide envision a world that is better connected, with faster speeds and better capacity for the massive data required for innovation. With network slicing, beamforming and massive MIMO, 5G represents a paradigm shift, with the Internet of Things (IoT) as its driver. Member countries of the OECD will scale their infrastructure with investments in small cell distribution and backhaul connectivity to promote intensive growth in the IoT. By 2035 the world economy should feel the impact in key sectors.

“The Road to 5G Networks” was approved by the Committee on Digital Economy Policy on 3 May 2019 and was prepared for publication by the OECD Secretariat. It is a contribution to the OECD Going Digital project. This report was drafted by Alexia Gonzalez Fanfalone with contributions by Sam Paltridge from the OECD Secretariat and WPCISP delegates regarding their country experiences. It was prepared under the supervision of Sam Paltridge and Verena Weber.

Each generation in wireless communications is an evolution from existing technology. The first generation was strictly analogue, created for voice only and has now been phased out. The second (2G) switched to digital, but remained mostly for voice and simple data transmission. In 2000, 3G offered higher transmission speeds for multimedia use and mobile broadband for the first time for smartphones. After 2010, 4G brought more data transmission capacity.

The three “generic use scenarios” for 5G are:

The fifth generation in wireless communications promises to be both an evolution and a revolution. It will build on the 4G network infrastructure, but, in order to provide higher speeds, lower latency and better security, investment must be made into “network densification.” The improvement will be substantial, with higher speeds up to 20 Gbps in downlink (200x faster than... 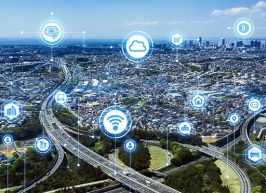