Review of The Road to Unfreedom 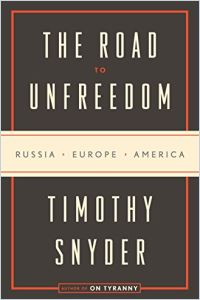 From On Tyranny to Black Earth and Bloodlands, Yale historian Timothy Snyder has made a specialty of meticulously researched analyses of tyranny’s causes and consequences. In his latest book, Snyder turns to Vladimir Putin and his war on democracy – sometimes conducted on the ground, but just as often on social media, in the code controlling power grids and voting machines, and within the human mind. Snyder’s premise is simple: If truth is, in fact, what sets us free, untruth must lead to tyranny. It is that exact consequence which has occurred in Russia under President Vladimir Putin, Snyder argues.

Snyder chronicles the resurgence of totalitarian thought in early 21st-century Russia, and examines how these views have shaped Russian domestic and foreign policy as Putin has grown increasingly dictatorial. Indeed, in the hands of Putin and his “political technologists,” antifactuality has become a mode of warfare against European and American democracy. As eloquent as it is distressing, Snyder’s book offers a compelling analysis of recent political events, and an urgent call to develop a politics of responsibility which reaffirms democratic virtues and values.

Timothy Snyder is Levin Professor of History at Yale University. He has received the literature award of the American Academy of Arts and Letters, the Hannah Arendt Prize in Political Thought and the Leipzig Book Award for European Understanding.

The politics of inevitability and the politics of eternity shape how nations understand themselves and their relationship with the rest of the world.

For Europe and America, the 20th century was marked by a belief in a “politics of inevitability” which posits that history marches inexorably toward a predetermined destination. In America, Timothy Snyder writes, the politics of inevitability took the form of a trust in market forces. These forces, it was thought, naturally produced democracy, which, in turn, would bring happiness. In the European form, nations arose, learned to value peace and, therefore, chose integration. Unlike the politics of inevitability, the “politics of eternity” does not believe in a better future; rather, it centers on the notion of perpetual victimhood: The enemy is always at the gates, and the present and the future are one. Eternity politicians suppress and deny facts that contradict their narratives or that suggest the possibility of change. Factuality itself becomes an enemy – thus, Donald Trump, an eternity politician, calls journalists enemies of the state and lies unapologetically.