Summary of The Rules of Contagion 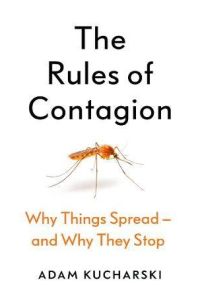 Despite the title, there are no real rules of contagion other than a basic pattern of growing, stabilizing and then declining. In this book, epidemiology professor and mathematician Adam Kucharski examines different types of outbreaks. Beyond infectious disease epidemics, other types of outbreaks include financial crises, viral online content, and the spreading of ideas and social behaviors such as obesity, yawning and even gun violence. Kucharski discusses traditional viral outbreaks such as Ebola and Zika, and the spread of malaria. But the more interesting chapters discuss how ideas and behaviors mushroom, from scientists who quote each other’s work in academic journals to friends influencing friends. This book was published before the COVID-19 pandemic hit but it’s appropriate reading during a quarantine.

Adam Kucharski is a mathematician who has worked on global outbreaks including the Ebola epidemic and Zika virus. Kucharski is also an associate professor at the London School of Hygiene & Tropical Medicine.

Every outbreak is unique. While some outbreaks spread quickly, others ebb off just as fast.

What sparks an outbreak and causes it to spread? Can the past predict what the next pandemic will look like? It’s easy to follow patterns and think the next outbreak will be similar to the one before it. Unfortunately, each individual outbreak is different. When researchers first hear of an outbreak, they draw a graph. An outbreak curve includes four stages – the spark, growth, peak and decline. A spark is only a start, and it’s difficult to predict which contagions will spread like wildfire and which embers will flame out.

In 2014, the Ebola epidemic in West Africa spread quickly from Guinea to Sierra Leone and Liberia. Cases were doubling every two weeks in the hardest hit areas, so 100 cases turned into 200 and 400 a month later. Other outbreaks move even faster, such as the WannaCry computer virus in May 2017. In the beginning, it was doubling in size almost every hour and hit 200,000 computers in 150 countries. Outbreaks affect many industries, including finance, politics, technology and health, and they’re constantly evolving.

The Covid Files 1: Corona by Numbers
7
Pandemics Past and Present with Jeremy Farrar
8
The Reemergence of Yellow Fever
8
Coronavirus Outbreak: How Scared Should You Be?
9
Substantial Undocumented Infection Facilitates the Rapid Dissemination of Novel Coronavirus (SARS-CoV-2)
10
Are We Prepared for the Looming Epidemic Threat?
8