Review of The Second Mountain 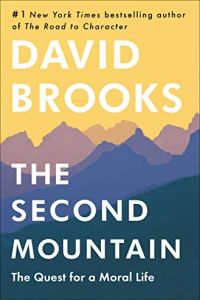 David Brooks, author of The Road to Character, suggests that the dominant ethos of the early 21st century is “hyper individualism”: seeing life’s purpose as attaining independence, self-fulfillment and happiness. Yet this trend spawns various spiritual and social afflictions, including loneliness, mental illness, substance abuse, a lack of a sense of purpose, and fragmented families and communities. Instead, Brooks believes that people need a vision of life that prioritizes relationships and commitments.

New York Times op-ed columnist David Brooks is a regular on the PBS NewsHour. He also wrote The Road to Character.

Brooks believes that people initially aspire to ascend the first mountain in life based on goals that are part of the current social and cultural norm, including going to a top university, getting a good job, gaining the respect of your peers, being invited to participate in respectable society, and enjoying personal security and happiness.

First-mountain values, he maintains, focus on egotistical desires at the expense of connection with others, generosity, compassion and love. Ego-based values, he warns, suggest that the unfettered expression of self and the acquisition of wealth and power are the only valuable goals. Brooks recognizes his own dichotomy, having applied his ambition and drive, achieved great success and attained much-desired professional positions, such as becoming an editorial contributor to The New York Times.