Summary of The Secret of Teams 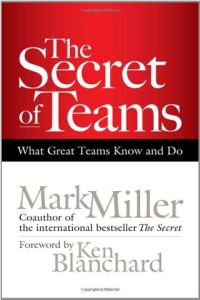 How hard do you have to work to create high-performance teams among your employees? Team-building expert Mark Miller answers that question and spells out the essentials in this office parable in which one dedicated executive sets out to find the secret of superb teamwork. As it turns out, creating great teams is a doable deed, but you have to be willing and able to undergo change, and you need three crucial ingredients: talent, skills and a shared sense of community. Miller, vice president of training and development at the Chick-fil-A chain of restaurants, demonstrates how to get everyone together, productively. He craftily uses the device of novelized business advice (an ugly thing in the wrong hands) to tell a useful story with a seasoning of personality. getAbstract recommends Miller’s warm team-building parable to managers, team leaders and HR professionals.

Mark Miller is vice president of training and development at Chick-fil-A, which has more than 1,300 US branches. He and Ken Blanchard wrote The Secret: What Great Leaders Know and Do.

As an organizational framework, the team structure has been common throughout history. Most people have been team members in some context, though often they haven’t enjoyed it. Most teams don’t achieve cohesion, much less top results, though that should be every team’s goal. Here’s how one leader and her rapidly improving executive team revolutionized their company's teams.

As her firm’s head of leadership development, superstar manager Debbie Brewster understood the importance of high-performance teams. Her mission was to improve her current, substandard team, a project she had completed successfully at her previous job. Her CEO, Jeff Brown, who was also her mentor, told her the overall corporation was having trouble building effective teams. Debbie’s concerns about her team paralleled Jeff’s worries about the productivity of all the company’s teams across its international operations. Jeff asked Debbie to investigate what factors make teams great. He predicted that she would discover that solid teams share some universal attributes. He suggested studying...