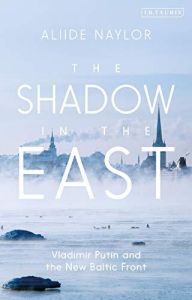 The Shadow in the East

The Baltics and Russia

Journalist Aliide Naylor provides a detailed protrait of the Baltics’ past, present and likely future relations with Russia.

In this revealing analysis of life in Lithuania, Latvia and Estonia, journalist Aliide Naylor argues that, despite having joined the European Union and NATO, these nations struggle to shed Moscow’s overbearing influence. Each shares a border with Russia – two have significant Russian minority populations – and lingering challenges hamper their economies.

The New York Times wrote, “Naylor…guides us through pagan rites, cigarette smugglers’ routes and secrets of the Nazi occupation. Naylor takes us inside a swath of Europe in a state of suspended animation, forced to serve as a testing ground for a war that may never come.” Peter Pomerantsev, author of This Is Not Propaganda, called this “an insightful, nuanced account…A mix of travelogue, social and political analysis, Naylor tells the stories and dynamics of the region from the inside, which is really the only way to understand them.”

Is This Putin’s Utopia?
8
Article