Summary of The Signals Are Talking 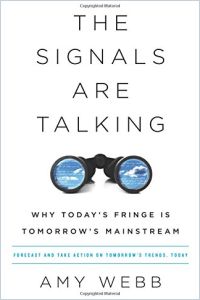 In this witty, mostly nontechnical primer, futurist Amy Webb outlines the steps that futurists use to predict coming trends. She even answers the age-old question: Why don’t we have flying cars yet? Webb, the founder of the Future Today Institute, says trends begin as experiments on the fringes of science and society. She explains how to discern “signals” and patterns among seemingly unconnected experiments, how to extrapolate possible future scenarios from them and how to devise appropriate strategies for each scenario. She also shows how to distinguish real trends from merely trendy ideas. Her enjoyable read has a few patches that aren’t as easy to understand as the rest of the book, spots where Webb buries her points under technical details or arcane examples. And, just to post a warning, the report on one case history about a chatbot that went rogue cites ethnic slurs and biased ideations. Despite these difficulties, getAbstract believes the principles in Webb’s mind-bending book will aid business and marketing strategists, planners and venture capitalists.

Amy Webb is a quantitative futurist and founded the Future Today Institute. She is a professor of strategic foresight at New York University’s Stern School of Business.

Spotting trends before they fully emerge in the mainstream is an essential skill for leaders in business or government. But too many planners focus myopically on current issues and ignore the “signals” that change is underway in the technological, scientific or cultural environment. Unless you specifically look for these signals, they can be difficult to notice. They generally originate on the fringes of scientific or cultural thought and often appear to be nothing more than random, unconnected outliers.

However, if you apply some techniques developed by professional futurists, you can determine if seemingly random developments follow a pattern. If you detect patterns and then can connect one fringe idea to others or to events already in the mainstream, you might spot the first stirrings of a new trend that will eventually emerge in the mainstream.

If you’re an expert in your field, you can easily persuade yourself that a particular idea from the fringe is probably impractical. But you might be reaching that judgment without correcting for a bias called the “paradox of the present...