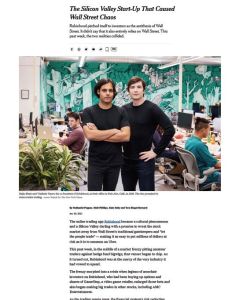 In January 2021, retail investors rallied to purchase the shares of GameStop, AMC and Blackberry, on which several Wall Street hedge funds held massive short positions. The buyers launched their offensive from the no-fee online trading platform Robinhood. The prolonged attack cost some hedge funds billions of dollars, and it nearly brought down Robinhood. In this compelling investigative article, New York Times journalists examine the purported Wall Street disrupter that nonetheless found itself at the mercy of the traditional financial system.

Robinhood seeks to upend the conventions of Wall Street.

A new breed of investors is flocking to the securities trading platform Robinhood, drawn in by free trades and calls to blunt Wall Street’s marketplace power. So many individuals are embracing Robinhood that its 2.7 million active users on one day in late January 2021 exceeded the combined number of those who traded with giants Schwab, TD Ameritrade, E*Trade, Fidelity and Webull that same day.

Yet even as Robinhood challenges Wall Street, the company must operate within the same financial ecosystem, which means that it has to...

In Defense of the IPO, and How to Improve It
8