Summary of The Small Business Die-Off Is Here 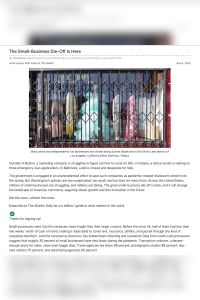 If you imagine that the US economy will ricochet back from the pandemic, creating a “V-shaped” line on the proverbial economic recovery graph, The Atlantic’s economic policy reporter Annie Lowrey suggests you curb your optimism. The curve of economic recovery will be decidedly “U-shaped,” she says, due in large part to the loss of small businesses. Given their crucial role in fueling innovation, productivity, higher wages and lower prices, the loss of small businesses may create a cascade of negative consequences.

The United States faces a completely new challenge: keeping most of its small business solvent. The government understands, or at least has vast experience in, supporting the “economic system,” but not as it relates to small businesses. Credit card transactions reveal that approximately 30% of small businesses have closed because of the pandemic. “Transaction volume” numbers are bleak: travel agencies have lost 98% of their business; photo studios 88%; day-care centers 75% and ad agencies 60%.

Though the Donald Trump administration and Congress created a $350 billion loan plan for small businesses, and have added another $320 billion, implementation issues have been daunting. Applications swamped baffled banks. Small business owners did not understand what paperwork they had to provide or for what funds they were eligible. Four out of five applicants had no idea if they could or would receive funds.

A great deal of the money flowed to the companies that probably would survive without it. Loans worth more than $1 million – far more than most small businesses applied for or needed – ate up 50% of the first $350 billion. Research suggests that the businesses and locations that most needed the funding got none, as seen in the tally of business closings and lost hours of work. For every three jobs lost in the pandemic, two were hospitality jobs, like those in hotels or restaurants. Hospitality workers received a disproportionately small (9%) amount of the available federal aid.

Jessica Yang applied for assistance from the Small Business Administration on behalf of her parents, who run a small sandwich and grocery business in Baltimore. Staying afloat through online orders with delivery services wasn’t an option; her parents couldn’t break even after paying the steep commissions, and their tiny business had never been online. The Yang’s family company didn’t stand a chance of weathering the pandemic storm, a fate it has in common with most small businesses. At the beginning of the pandemic, half of small businesses didn’t have enough cash to pay their overhead costs – rent, utilities, payroll and insurance – for more than two weeks.

“Four in five applicants to the two emergency programs were unsure whether they would receive help when the first tranche of money ran out.”

Aid from the US Small Business Administration (SBA) and the Paycheck Protection Program would have been more effective in a short-term crisis, if expectations were for a quick return to normal. But things won’t return to normal for small businesses – not quickly, and maybe not ever.

The pandemic will exacerbate existing inequities for immigrants and people of color.

After Yang submitted the application, she saw a news report that the money had already run out. The application process had been complicated, particularly for small business owners like her Korean-American parents, who had to penetrate language or cultural barriers to get reliable information. Despite their daughter’s help, SBA aid never came through for the Yangs’ small business.

Aid packages were "too complicated, too small and too slow.”

Economists have a “playbook” for keeping the financial system afloat, but they’re not sure how to keep millions of small businesses viable in a crisis. One out of four small business owners expect to go under, and one third of the rest aren’t sure their firms will survive. Business owners of color face a disproportionate challenge. Lacking previous major banking relationships, they’re less likely to receive traditional emergency loans. Also, a larger per-capita share of SBA assistance went to regions that are less densely populated – that is, whiter.

Small business closures will irrevocably alter the US economy.

The US economy will change as a result of small business closures. Because small businesses drive innovation, jobs and productivity growth, their closures will render the nation less competitive in the global business market.

“When businesses liquidate, they lay off workers, who spend less in their local economies, making other businesses weaker, necessitating further layoffs.”

When industries consolidate leaving only large, established corporations, wages go down and prices go up. The collapse of small businesses means the economic recovery will be slower, catalyzing and perpetuating the effects of the pandemic. Franchises are likely to replace mom-and-pop shops and hole-in-the-wall restaurants. Executives will prevail over scrappy entrepreneurs and the competition between incumbents and start-ups will become even more lopsided. The die-off is happening now. So far, aid packages have proven insufficient to make a difference.

Annie Lowrey covers economic policy for The Atlantic. She previously held staff writer positions at The New York Times and Slate. She is the author of Give People Money: How a Universal Basic Income Would End Poverty, Revolutionize Work, and Remake the World.

Lost Art
8
How Are We Feeling?
8
Raised in a (Very) Crowded House, Now Feeding the Hungry in a Pandemic
9