Review of The Source of Self-Regard 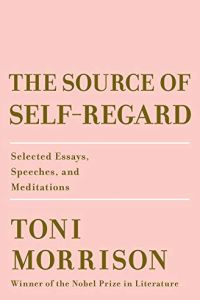 Luminary author, scholar, Pulitzer and Nobel prize-winner Toni Morrison presents this final compilation of speeches she gave throughout her career, loosely cataloged in three sections. In addition to writings about art, imagination, globalism and the experience of the “other,” Morrison explores the persistent conflicts of race in United States’ history, literature and within her own writing process. Morrison, a gifted original thinker and critic, died in August 2019 at age 88. Readers interested in her literary and intellectual legacy will appreciate these insights from a writer in full command of her subjects and her language.

Recipient of the 1993 Nobel Prize in Literature, Toni Morrison wrote 11 novels, including Beloved, for which she won a Pulitzer Prize.

In her 1995 speech “Racism and Fascism,” Morrison explained how to demonize bigotry.

In “Racism and Fascism,” Morrison identified the weapons that bigotry uses to spread its virulent message. She movingly described how it employs mass communications to gain legitimacy, to make money and to create propaganda. Bigots, the author believed, expel anyone who resists their process. They find co-conspirators to whitewash their efforts to dispossess people. Once they make their enemies look like criminals, they prepare to detain them. Morrison recognized a crucial piece of the bigots' strategy when she noted that they reward people who keep the silence by making them think they have control and can shape events.

Morrison characterized racism and fascism as “twins.” Both fear democratic processes and seek to throw out what racists and fascists regard as bad elements, to privatize public services, and to blur the lines between business and government. “The genius of fascism,” the author said, “is that any political structure can host the virus…Fascism talks ideology, but it is really just marketing.”

Strategic Doing
9
How to Hold a Grudge
8
WorkParty
8