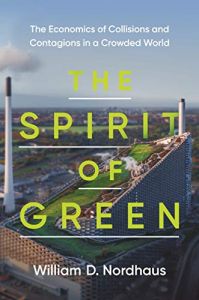 The Spirit of Green

The Economics of Collisions and Contagions in a Crowded World

The review below was first published in the getAbstract Journal on May 3, 2022.
We’ve reviewed this title for you as we currently cannot offer a summary.

William D. Nordhaus – Nobel Prize-winner and professor of economics and environment at Yale University – approaches environmental issues with an economist’s eye for rationality and practical efficiency. In this accessible overview, he details how to fold climate change mitigation into market processes. Nordhaus advocates policies, such as a carbon tax, that create maximum benefits at minimal costs, and he advises against arbitrary command-and-control regulation.

Pragmatic environmentalists will recognize the necessary role of markets in protecting the planet. Nordhaus sensibly argues that measures that inflict the least harm to people’s lives and wallets will most easily gain widespread support.

8
Report
The 2018 Report of the Lancet Countdown on Health and Climate Change
8
Article
Why has climate economics failed us?
8
Article
Can We Have Prosperity Without Growth?
9
Book
The Economics of Sustainable Food
8
Report
The European Green Deal
8
Book
Stakeholder Capitalism