Summary of The Starfish and the Spider

Ori Brafman and Rod A. Beckström

Portfolio, 2006
Copyright © Decentralized Revolution, LLC, 2006. From THE STARFISH AND THE SPIDER by Ori Brafman and Rod A. Beckstrom Summarized by arrangement with Portfolio, a member of Penguin Group (USA), Inc.
ISBN: 9781591841432
Pages: 240 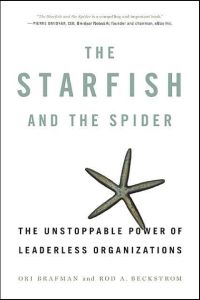 In 1946, after intensive research, Peter Drucker wrote Concept of the Corporation, a study of decentralization at General Motors. Drucker's book had a profound influence on the business world, particularly on Japanese auto manufacturers, such as Toyota, which incorporated many of his ideas into its operations with great success. Flash forward to 2006, when Ori Brafman and Rod A. Beckstrom wrote this pivotal book about "leaderless organizations." Their insightful analysis concerns the remarkable organizational revolution under way as hierarchies (spider entities) give way to decentralization (starfish entities). The fundamental tension between these two forces remains a pivotal dynamic in business. Today's decentralization movement makes awareness even more critical. GM failed to learn from Drucker's book. This turned out to be a huge mistake. getAbstract recommends: Do not make the same mistake with this important book; it should not be ignored.

Ori Brafman and Rod A. Beckstrom are successful entrepreneurs who hold M.B.A.s from Stanford. They co-founded Global Peace Networks, an organization of CEOs dedicated to conflict resolution and economic development in Africa and the Middle East.

The spider is a simple creature. It has a head, a body and eight legs. Cut off a leg or two and it can survive. Cut off its head and it quickly dies. Unlike the spider, the starfish is an enigma that has baffled biologists for centuries. It has five legs but no head. Even stranger, when you cut a starfish down the middle, the two halves will grow into two starfish. You can even cut some starfish into little pieces and each separate piece will grow into a new starfish! The starfish can do this because it has a decentralized neural network with no brain. Each portion of the starfish is equally important; it has no overall command center. This characteristic can be equally advantageous for organizations. To see why, look at the fate of three civilizations – the strictly hierarchal, spider-like "command-and-control" Aztecs and Incas, and the Apaches, who were organized like the starfish in a nonhierarchal manner.

The Aztecs, the Incas and the Apaches

The Aztecs and Incas were mighty civilizations with great cities, pyramids and temples. They were organized under powerful leaders in rigid hierarchies. But in only a few years, ...