Summary of The Supply of Disinformation Soon Will Be Infinite 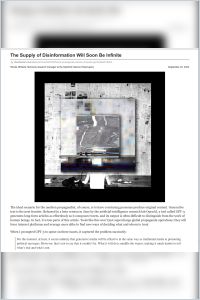 In the digital age, social media accounts and plagiarized articles can launch media careers or disinformation campaigns. The next frontier is content generated by artificial intelligence (AI), texts that people find difficult to distinguish from the work of old-fashioned propagandists. The digital world was already prone to disinformation and, as Renée DiResta reports in The Atlantic, this new development will build increasing suspicion and distrust. She posts a giant red flag: If you thought influencers and propagandists were slippery, they’re about to get a lot more so.

Renée DiResta is the technical research manager at the Stanford Internet Observatory.

Just a few years ago, traditional investigative techniques could expose organizations disseminating disinformation or propaganda under fake bylines. For example, in 2016, a purported author pitched articles to progressive media sites, which accepted some of them for publication. Two years later, The Washington Post obtained information from an FBI report that the author did not exist and was, instead, a totally fictitious byline created by a Russian intelligence agency. Further investigation found that the fictitious author was plagiarizing other fictitious authors.

The ease of searching for articles and images on the internet means that users can expose fictitious writers and their equally fictitious social media collaborators. Given that, Russian disinformation operators adapted. They created...

On Digital Disinformation and Democratic Myths
9
The Mainstream Media Won’t Tell You This
8
In 2020, Disinformation Broke the US
9
So much for the decentralized internet
8
The Next Frontier in Digital and AI Transformations
7
Experts Knew a Pandemic Was Coming. Here’s What They’re Worried About Next.
9