Summary of The Sword and the Shield 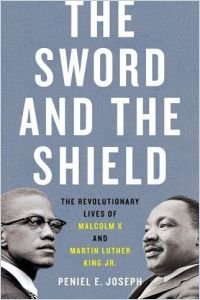 In the spring of 1964, Malcolm X and Martin Luther King Jr. attended the Senate debates on the US Civil Rights Act, which President Lyndon Johnson was pushing forward as a tribute to the late John F. Kennedy. King, already a celebrity, was about to win the Nobel Peace Prize. Malcolm X, a representative of the Nation of Islam, was a far more controversial figure who rejected nonviolence. But, as Peniel E. Joseph shows, by 1964 both men were changing. Malcolm X sought to influence and change democratic institutions. King understood that racism and poverty were a threat to the entire world. They both left a legacy that still shapes discussions of racism and injustice.

History professor Peniel E. Joseph holds The Barbara Jordan Chair in Ethics and Political Values at the LBJ School of Public Affairs at the University of Texas. The author of Stokely: A Life, he was founding director of the Center for the Study of Race and Democracy.

Malcolm X (Malcolm Little) was the child of followers of Marcus Garvey, and he grew up with a sense of “Black pride.”

Born in 1925, and named Malcolm Little, Malcolm X grew up in a family that revered the work of civil rights pioneer Marcus Garvey and affirmed the idea of “Black pride” and the importance of “Black dignity.” Garvey’s philosophy of “Black nationalism” held that people of color needed to establish centers of political power.

Garvey, a Jamaican, focused his work on the urban Black population in the United States. That population increased during the “Great Migration,” the movement of Black Americans from the South to northern cities. Garvey’s philosophy and anti-colonial critique, which emphasized the importance of community and knowledge of Black history and culture, spread through American Black communities.

In 1931, Malcolm Little’s father suffered a serious – ultimately fatal – injury in a reported street car accident that may have been a racist assault by the “Black Legion,” a group similar to the Ku Klux Klan. In 1938, Malcolm’s widowed mother was committed to a mental institution, where she remained for more...