Summary of The Third Pillar

Penguin Press, 2019
© 2019
From THE THIRD PILLAR by Raghuram Rajan Summarized by arrangement with Penguin Press, an imprint of Penguin Publishing Group, a division of Penguin Random House LLC.
ISBN: 9780525558316
Pages: 464 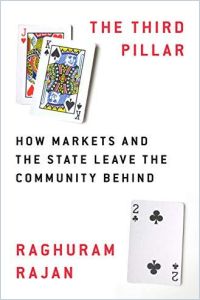 Across many advanced economies, market forces have run roughshod over communities, noted economist Raghuram Rajan argues in this study of globalization. He details a familiar litany of woes – manufacturing jobs lost, the rise of populism and voters scapegoating immigrants. Refreshingly, though, Rajan takes a middle-of-the road path, calling out both leftists and rightists for positions he considers misguided. He also offers some important solutions, but as intriguing as those ideas are, it’s unclear how much traction those positions might gain in today’s polarized economic politics.

Raghuram Rajan is a finance professor at the University of Chicago. He was the governor of the Reserve Bank of India and chief economist at the International Monetary Fund.

Societies are made up of three crucial, interrelated parts – the public sector, the private sector and the community.

These three sectors constantly change, just as society itself shifts, but in recent decades, the three pillars have fallen out of equilibrium. The rise of information technology since the 1970s has weakened the third pillar, community, and shifted power to the private sector.

Economic growth is just one measure of societal success. It’s important that opportunity be distributed across communities, so that people who value their neighborhoods aren’t forced to leave for the sake of their own financial good. Burgeoning markets have enriched some communities while fraying others. In some cities once dominated by factory jobs, the main source of employment has disappeared. Places that once were home to people from mixes of economic classes have fallen victim to “sorting” – the flight of affluent groups to areas where their children can attend better schools.

Communities fall into a number of categories. They can include families or clans, groups who live in the same neighborhoods or villages, people who work together...

Geopolitical Alpha
8
The Myth of Capitalism
9
Not Working
7
Global Inequality
9
This Economist Predicted the Last Crisis. What’s the Next One?
8
The American Economy
7