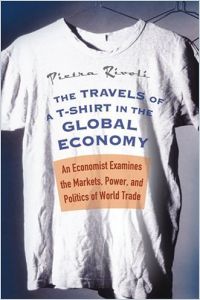 In 1999, author Pietra Rivoli attended a Washington, D.C. demonstration against globalization. A young woman asked the crowd, "Who made your T-shirt?" before she described worldwide labor abuses and mistreatment of garment workers. That shouted question and the assumptions implicit in it stimulated the author’s imagination. She decided to find the answer. Her compelling book tracks T-shirts from the Texas cotton fields, through manufacturing in China, to consumers in the U.S. and to Africa’s used clothing market. In this interesting, original approach to the issues of globalization and industrialization, Rivoli shows the economic, political and social forces that come to bear on a T-shirt. Through she can’t literally track a single shirt step-by-step, she sustains that metaphor. Buying a shirt, she works her way backward in time and space to find its origins, or the origins (and eventual lifespan and demise) of such T-shirts, by relying on inference, deduction and reasonable assumption. Her most stunning, most negative conclusion is that - despite debates over free trade and allegedly exploitative markets - everyone involved seems devoted to avoiding market forces altogether. getAbstract.com says this book deserves its own T-shirt with "Must Read" on the front and "Highly Recommended" on the back.

Pietra Rivoli is an associate professor at Georgetown University’s McDonough School of Business in Washington, D.C.

A young woman at an anti-globalization rally passionately called out the question, "Where did your T-shirt come from?" In response, author Pietra Rivoli started her quest: tracing the travels of a T-shirt in the global economy. Her T-shirt travelogue begins in the Texas cotton fields, as bolls on cotton plants proceed through ginning and baling. Their next stop: Shanghai, China, where the Shanghai Number 6 Cotton Mill turns raw cotton into yarn and the Shanghai Knitwear Factory turns the yarn into T-shirts. Shanghai Knitwear sells the blank, white T-shirts to a Florida entrepreneur who imprints them with Floridiana and supplies them to retailers for the tourist trade. The author buys her shirt at a beachside drugstore. Eventually, she follows the path most T-shirts take when their owners discard them, to the used clothing market to its end-of-days in Africa. So the humble T-shirt is a champion globetrotter.

Rivoli bought her T-shirt near Ft. Lauderdale beach, at a Walgreen’s drugstore selling a bin full of Florida-themed T-shirts for $5.99 each or two for $10. She checked the label and telephoned the offices of the Sherry Manufacturing Company. Quentin...