Summary of The Triumph of Nancy Reagan 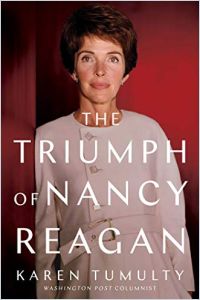 The Reagan era had its controversial touchstones, including first lady Nancy Reagan’s personality and influence. Journalist Karen Tumulty’s groundbreaking biography details how Mrs. Reagan could read people, see the big picture and direct “Ronnie’s” advisers on policy. The Cold War ended, in part, because Nancy Reagan insisted that President Reagan meet then-Soviet president Mikhail Gorbachev. She rescued her husband’s legacy by helping him apologize for his part in the Iran-contra affair. Her Just Say No campaign set out to help kids tackle the drug culture, though it achieved little. Poised and gracious in public, this first lady was fierce, loyal and sometimes ruthless behind the scenes.

Karen Tumulty writes about politics for The Washington Post and previously worked for TIME magazine, The Los Angeles Times and The San Antonio Light.

Nancy Davis met Ronald Reagan in 1949 in Hollywood; both were film actors who’d had middling careers. Ronald Reagan (Nancy Reagan called him “Ronnie”) suffered a painful divorce from his first wife, the actor Jane Wyman. Nancy Reagan, whose father disappeared when she was a baby and who was raised by her strict but loving stepfather, a surgeon, saw a chance to realize her ambition to have a healthy marriage.

With some cajoling, Ronald Reagan acquiesced to the union, and they married in 1952. He vowed to dedicate all his emotional energy to his wife, sometimes even to the exclusion of their children. She, in turn, committed her energy to his success and would be his protector, confidante and muse for his entire political career.

The couple left their film careers behind in the 1950s. Nancy Reagan devoted her time and energy to home and family, while her husband found work in television. A new show, General Electric Theater, hired him as its host in 1954, and the fame and connections it brought him over its eight-year run seeded...