Summary of The Truth about Leadership 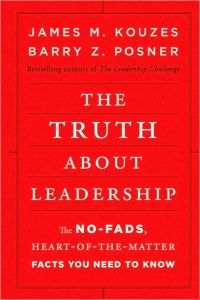 This straightforward guide by James M. Kouzes and Barry Z. Posner, titans in the executive leadership field, reviews decades of research. The authors distill that research into 10 laws of successful leadership. They write plainly and use examples to convince you that leadership doesn’t start with technology or innovation. Instead, you’ll learn that leaders need to believe in themselves, build relationships and trust, know their own values, and never stop learning. The book throws in lessons about behaviors you need, attitudes you should cultivate and actions to take as you ascend any leadership mountain. For managers big and small, leaders-in-waiting and anyone interested in the soul of leadership, getAbstract suggests this quick and easy read.

Distilling Leadership to Its Essence

Changes in economies, technologies and workplaces have transformed the details and “context” of leading. But the essential fundamentals – the systems, actions and attitudes – of leadership remain intact. Supporting data reveal these “10 truths” about leadership:

Leadership starts with a belief that you can do something that matters, like Melissa, a nine-year-old from Nashville, Tennessee. Her concern about the environment prompted her to write a letter to President George H.W. Bush, asking him to fight pollution. She organized her classmates to join the fight by writing letters, recycling and starting a club. Within six months, her letter to Bush had been printed on 250 donated billboards across the United States, her club had gone national and the president’s eventual form letter response became irrelevant. Melissa’s belief that she could make a difference was all that mattered. What she did – and what you can do – makes a leader.

Role models for leaders may emerge from unexpected places. Family members make up most role models, followed by teachers and coaches, not CEOs or executives. Look...