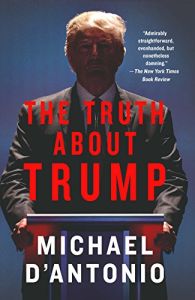 Book The Truth About Trump

Part of a 1984 Pulitzer Prize–winning team at Newsday and now a full-time author, Michael D’Antonio has written several other books covering many areas, including sports. He is what used to be known as a general interest reporter. Thus, D’Antonio brings a generalist’s – and an award-winning journalist’s – approach to Donald Trump’s biography. This means he describes major arcs of Trump’s life broadly and burrows deeply into other aspects, such as Trump’s time in military school; his immigrant grandfather’s hard-working determination; his father’s rise to success; his mother’s grasping ambition; his brother’s struggle with their father’s idea of manly competition; his first marriage; his mentoring by infamous “mob lawyer” Roy Cohn; his affair with, marriage to and divorce from Marla Maples; his methods of negotiations or, as some might call them, his wide range of bullying tactics; and much more. While always politically neutral, getAbstract recommends D’Antonio’s respected reporting to those who are curious about Donald Trump’s life and business dealings, whether they admire him or not.

D’Antonio presents entertaining and illuminating anecdotes about Trump at various points in his life. He details many of Trump’s most significant deals and developments, and does a superb job of untangling Trump’s deliberately obfuscating corporate, business and contract structures. He’s pretty clear that he doesn’t personally care much for Trump, regarding him with both awe and contempt. D’Antonio’s book reached bookstores before Trump’s presidential election victory, so he doesn’t speak of Trump as president-elect. Given D’Antonio’s perception of Trump as a bully and occasional buffoon, the only person more surprised at Trump’s electoral victory than, perhaps, Donald Trump himself may well have been Michael D’Antonio. But his journalistic credentials and reportorial practice remain unassailable, and this is not a hatchet job.

D’Antonio moralizes here and there about Trump’s more questionable tactics and personal behavior, but his deep research and rigorous reporting make the book feel like the truth. Because D’Antonio is sufficiently up-front about his lack of regard for Trump, you can use his enmity as a barometer and adjust your acceptance of his reportage accordingly. That said, when Trump does admirable things, D’Antonio cites them as such. Given Trump’s famous penchant for relentless litigation and petty payback, it’s a fair bet that D’Antonio’s publisher’s attorneys required the author to vet every assertion and show them the proof. That tendency of Trump’s, even more than D’Antonio’s distinguished career, serves as a guarantor that The Truth About Trump contains scant exaggeration and that D’Antonio describes what really happened.

Part of Newsday’s 1984 Pulitzer Prize–winning team, Michael D’Antonio also wrote Mortal Sins; A Full Cup; Forever Blue; A Ball, A Dog, and A Monkey; and Tour ’72. His work has appeared in Esquire, Sports Illustrated and The New York Times Magazine.