The Center For Army Leadership 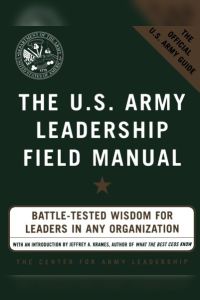 As the army’s touchstone for leadership, The U.S. Army Leadership Field Manual stresses ethics, high moral character and the honorable refusal to obey unlawful orders. This volume makes you ask, "How could the prison abuse incidents in Iraq in 2004 have happened?" American army training repeatedly emphasizes moral leadership, character and integrity, as seen in this primary field manual of leadership, which is used by soldiers and officers everywhere. Read the principles that helped shape such leaders such as Marshall, Eisenhower, Schwarzkopf and Powell. You can employ many of their lessons of moral courage and determination in the corporate boardroom. getAbstract.com highly recommends this very readable book for those who seek to put current events into clearer context and to make use of their lessons.

This volume is the product of The Center For Army Leadership, which conducts research on emerging leadership trends, and establishes the standards of leaders in the U.S. Army. The Center, located at the General Staff College at Fort Leavenworth, KS, also creates the leadership training curriculum used throughout the Army. This book is known in the military as FM 22-100, The U.S. Army Leadership Field Manual. It is the single-source reference for all U.S. Army leaders.

General Tommy Franks, the military commander of the 2004 Gulf War, General Norman Schwarzkopf, commander of the first Gulf War, and Secretary of State Colin Powell all have something in common. With countless others, they are exceptional leaders who were trained in the United States Army. What does the Army teach that enables it to create effective, inspirational leaders?

The key attribute for command in the U. S. Army is character. In other walks of like, what you know or do might be the foundation of your promotion – not in the Army. Army leadership begins with the leader's innermost character, the internal strength that enables him or her to do the right thing regardless of adversity. The Army motto describes this as "Be, Know and Do." Being a person of high character comes first.

Character is who you are. The core of who you really are doesn't change. It's the same when you're speaking to a group or when you are by yourself, when all eyes are on you or when you think nobody is watching. Character helps you know what is right and wrong, and follow right over wrong consistently. Army leaders must reflect the highest...