Summary of The Ukrainian Night 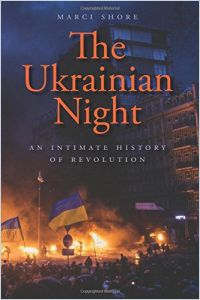 Since the end of the Cold War, Ukraine has emerged as a case study in the dashed dreams of budding democracies. A substantial number of Ukrainians want to stiff-arm Moscow and embrace European-style liberalism; but many others prefer the post-communist status quo: a system of strongmen and corruption. Yale historian Marci Shore lays out the Ukraine paradox in this detailed study of the Maidan protests in Kiev in late 2013 and 2014, and the subsequent war in eastern Ukraine. In a style that is by turns journalistic and impressionistic, Shore describes the protesters’ grievances and casualties. Clearly sympathetic to the Ukrainian freedom fighters and skeptical of both Ukrainian strongman Viktor Yanukovych and Russian ruler Vladimir Putin, Shore delivers a compelling account from the perspective of Ukrainians who hope their nation will, one day, embrace the rule of law and achieve political and economic stability.

Marci Shore is an associate professor of history at Yale University and award-winning author of Caviar and Ashes and The Taste of Ashes. She has spent much of her adult life in Central and Eastern Europe.

Ukraine’s independence from the Soviet Union in 1991 felt like a revolutionary moment, the dawn of democracy. Instead, Ukraine devolved into kleptocracy. Leonid Kuchma took power in the 1990s and created a “blackmail state” – employing blackmail to repress dissent. His handpicked successor, Viktor Yanukovych, was a convicted armed robber and paragon of corruption. Yanukovych’s opponent in the 2004 election was Viktor Yushchenko, a central banker and democratic reformer. Yanukovych won the election, but the victory was tainted by evidence of election fraud, which included poisoning Yushchenko with dioxin. On the streets of Kiev, thousands of Ukrainians protested the election results during demonstrations in November 2004. This so-called “Orange Revolution” was peaceful – and successful. Ukraine held new elections in December 2004, and in January 2005, Yushchenko became president.

Alas, the Orange Revolution’s democratic promise soon withered. Yuschchenko wasn’t a reformer after all. Yushchenko allowed oligarchy and corruption to stand. He also turned to nationalism as a way to ...