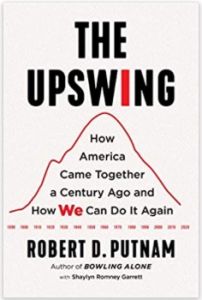 With exhaustive data, illustrative charts and fascinating insight into America’s shifting popular attitudes, Robert Putnam – a sociologist and the author of the seminal social analysis, Bowling Alone – shows that US society, culture, politics and economics followed a remarkably similar arc over the past 125 years or so. From the extreme inequalities and divisiveness of the Gilded Age to the equalizing reforms of the Progressive Era and back again, Putnam  – writing with social entrepreneur Shaylyn Romney Garrett –  reminds Americans of the times when their country works best. It happens when society lifts all boats and balances between its core ideals of rugged individualism and opportunity for all.

The United States has lost its enviable balance between self-interest and concern for others.

When French aristocrat Alexis de Tocqueville visited America in the 1830s, he witnessed a new nation that managed to balance respect for the individual with strong community values. Tocqueville admired Americans’ commitment to self-reliance without selfishness – their understanding that all boats rise together. He called it “self-interest, rightly understood.”

If Tocqueville arrived in America today, he would see a more prosperous, better educated nation where even the poor live better than they did in the 1830s. But he also would bemoan America’s “rigged system”: a society rife with inequality and inequities, that stacks the odds against those without accumulated wealth. He would witness a near-plutocracy that secures the fortunes of those at the very top, regardless of their merit, effort or talents. He would mourn for a nation in which corporations and their profits matter more than the future of the country, a country that literally burns as it grows warmer and less hospitable to life.

Political scientist Robert D. Putnam, a professor at Harvard University, earned the National Humanities Medal in 2012. He is the author of the seminal social study, Bowling Alone, and was one of the influential modern philosophers featured in BBC radio’s series, Morality in the 21st Century, moderated by the late Lord Rabbi Jonathan Sacks.