Summary of The Vanishing American Corporation 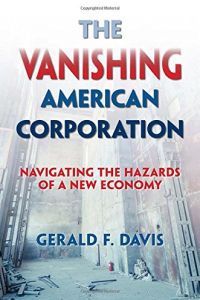 If you like books that offer a new way of looking at the familiar and that challenge your previously held assumptions, you will revel in this one. Professor Gerald F. Davis notes that corporations have been the bogeyman in many narratives, embodying all the sins of capitalist greed. But he warns you to be careful what you wish for: With outsourcing, corporate raiders, the Internet and “platform capitalism,” the American public corporation is dying out, and with its demise go prospects for middle-class jobs and careers. The picture Davis paints is realistic and sobering, and, as the best books do, his work could change the way you look at the world. getAbstract recommends this enlightening text to employers and employees – corporate or not.

Gerald F. Davis is a professor of management and sociology at the University of Michigan.

In the aftermath of World War II, large public corporations in the United States operated “like small private welfare states.” They provided their employees with health care insurance, pensions, advancement and stable wages, among other benefits. These drove the growth of the American middle class and provided economic security and income equality. Then, in the 1980s, conglomerates broke apart to focus on their core businesses and shareholder value. In the 1990s, corporations revised that effort to include outsourcing and offshoring.

The 21st century’s new wave of “platform capitalism,” made possible by web technologies, is further disrupting America’s large corporations, wiping out their economic rationale for existing and replacing them with smaller, leaner businesses that are light on employees. Just as you might see unskilled laborers congregate on street corners in hopes of finding a day’s work, so the new platform businesses are putting skilled people on a virtual street corner, hustling for paid tasks.

The Rise of the 20th-Century American Corporation