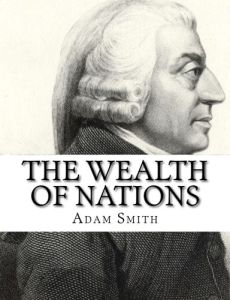 The Wealth of Nations

getAbstract believes that no serious economist can do without this exhaustive work, originally published in five volumes as An Inquiry into the Nature and Causes of the Wealth of Nations. This classic is a pragmatic and accessible milestone in the history of economics. Its author, Adam Smith, is woven into every economics textbook. However, Smith’s theories, which today often are recounted mostly in fragments, frequently incorrectly, reveal their entire social and economic innovative power only in context. Smith burst onto the scene at a time when absolutist national states monopolized the world’s precious metal reserves and tried to increase their own wealth through stringent export policies. These states were motivated by an entirely new concept about national wealth: that it stemmed from the work of the country’s people, not from gold. Based on that idea, economic markets should balance themselves as if guided by an “invisible hand,” impelled by each individual’s self-interest. The state has to provide only an orderly framework and specific public goods and services. Even though Smith’s image of idealized economic and social harmony may have developed a few cracks over the course of time, his ideas have inspired many well-known economists during the past 250 years, including David Ricardo, Vilfredo Pareto and Milton Friedman.

Progress through Division of Labor

The division of labor has improved productivity enormously. Instead of an individual worker producing a product from beginning to end, production now can be divided into individual steps. For example, manufacturing one pin requires 18 different steps. An untrained worker may be able to produce only a few pins per day. However, if 18 workers each execute just one step, they can produce several thousand pins by the end of the day. In fact, the division of labor is one of the greatest achievements of progressive society. It developed because people have a natural propensity for exchanging goods. Each individual has different talents and, given the assistance of a barter economy, people can specialize: The baker bakes bread, the butcher supplies meat, and so on.

The Market and the Invention of Money

For trade to work, suppliers and consumers must have a market where they can meet. The size of the market has a direct influence on the scale of the division of labor: If the market is very small, specialization cannot function. In a small village, for example, nobody needs a porter; however, in a large city, porters are in demand...

Adam Smith, the son of a jurist, was born on June 5, 1723, in Kirkcaldy in Scotland. He learned moral philosophy from Francis Hutcheson, whose teachings combine the ideas of the philosophers John Locke and David Hume. After studying in Oxford and Glasgow, and teaching for some time, Smith was appointed professor of logic at Glasgow University in 1751, and professor of moral philosophy one year later. During this time, he was in close contact with David Hume, whose ethical and economic ideas influenced him substantially. In 1763, Smith left Glasgow for a two-year educational journey through France and Switzerland as a young duke’s private teacher. From his encounters with the French physiocrats Turgot and Quesnay, Smith developed the idea for his main work, The Wealth of Nations. However, he did not finish and publish it until 1776. In 1779, Smith was appointed duty controller in Edinburgh, where he died on July 17, 1790. Shortly before his death, he ordered his friends to destroy all of his unfinished writings.

The Woman Who Shattered the Myth of the Free Market
9