Summary of The Weightless World 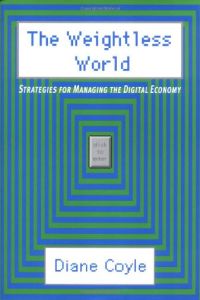 U.S. Federal Reserve Board Chairman Alan Greenspan originated using "weightless" to describe computer-powered information technology. Diane Coyle employs his metaphor to explain that the European world is afflicted with unemployment and insecurity because of the evolution from industrial output to weightlessness. Her view of the new technology’s international economic impact is distinctly European/British. She paints her strategy for managing the digital economy with a colorful but broad brush: better education, international ethical standards, governmental flexibility, liberalism. Her writing features quirky phrases, challenging sentence structure, and a few British spellings. Coyle includes surprising anecdotes and sparkling quotes from diverse sources - a valuable lexicon for further reading. getAbstract.com recommends this book to those with an eclectic, liberal, literate, European view of the difference between the U.S. economic experience and that of the rest of the world. Such a reader will be delighted here.

Diane Coyle is economics editor of The Independent, in London, England.

Fifteen years ago, the value of imports was measured by their weight: hundred-weights of wheat, barrels of oil, tons of computers. Today the idea of weighing a shipment of computers is absurd on its face. Imagine weighing software or a web site or a designer label. They are the new products of the weightless economy.

Alan Greenspan suggests that only once or twice a century does the world experience radical transformations in what it produces and how. Profound technological change always involves economic upheaval. The world is experiencing one of those radical transformations and a predictable cascade of events is under way. Weightlessness symbolizes the economic effects and implications of this cluster of advances in information and communication technology. Like any technical development, it interacts with other fundamental changes, such as demographic and social trends, and the sweep of political history.

At the same time, the industrial world’s population is aging. The number of workers available to pay for the welfare state is declining. In the nations where the population is aging, but is not being replaced by the children of the native ...