Summary of The World Is Still Producing More Oil Than It Needs. Why? 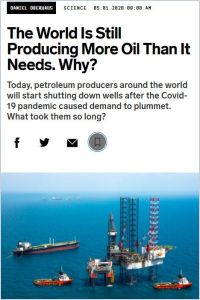 You likely saw the reports about how COVID-19 is affecting the environment: pollution dropping up to 30% in big cities in China and the United States, swans and fish swimming in the suddenly clear waterways of Venice, coyotes frolicking on the normally bustling beaches and streets of San Francisco. Reduced human movement means nature can take back her own. But reduced human movement also means reduced demand for fuel. Daniel Oberhaus from WIRED offers readers a crash course in how the oil industry is handling the unprecedented drop in demand sparked by the global pandemic.

Daniel Oberhaus covers energy and space exploration for WIRED. His book, Extraterrestrial Languages was published in 2019.

As one of the most sought after substances on earth, you may expect a barrel of oil to hold a fairly consistent value. At the very least, you wouldn’t expect it's price to veer into negative territory – but that’s exactly what happened on April 20th, 2020, if only for a few minutes.

As the COVID-19 pandemic grew more serious, flying and driving all but ceased. Suddenly, all the oil the industry was pumping out of the earth had nowhere to go.

In late April, With storage space for excess oil running out, the United States, Russia...

COVID-19 Risks Outlook
8
In a Warming World, How Should Big Oil Navigate the Future?
8

How Will COVID-19 Affect Machinery and Industrial Automation?
8
A Primer on the Geopolitics of Oil
7