Summary of The Year Without Pants 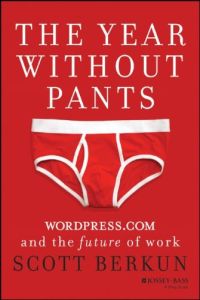 What is it like to work for a company that breaks all the rules? Management expert Scott Berkun took a job at Automattic – the parent company of WordPress and WordPress.com – to find out. Office politics, hierarchies, production schedules and other traditional work structures do not constrain Automattic employees. They work remotely from around the world. They can be anywhere and work anytime since the firm judges them solely on the quality of their results. Berkun describes the positives and negatives of this revolutionary company and predicts how its example might influence the future of work. His witty stream-of-consciousness narrative engages, but leaves gaps – the reader must work to extract necessary management lessons. getAbstract recommends Berkun’s journey into the workplace of the future to entrepreneurs, investors, start-ups and leaders on every level.

Management expert, blogger and speaker Scott Berkun is the author of Making Things Happen, The Myths of Innovation, and Mindfire: Big Ideas for Curious Minds.

In 2010, Matt Mullenweg, founder of WordPress, asked management expert Scott Berkun to join his company, Automattic, which runs WordPress and WordPress.com. WordPress is the open-source software that powers 20% of the web. That translates to more than 60 million sites, including dozens of the world’s most popular blogs. Millions of bloggers utilize Wordpress, the 15th-most-visited website worldwide.

Matt Mullenweg, then an 18-year-old amateur photographer, founded WordPress out of frustration. He had an avid commitment to open source and wanted to “democratize publishing” by making it available to everyone free of charge. He had been posting pictures on photomatt.net via Cafelog. He used the open-source license to copy Cafelog’s source code. The site had a “copyleft” license called GPL, which allowed Mullenweg to “create a fork” if the software he developed remained open source.

When Mullenweg announced his intention to fork Cafelog on his blog, UK programmer Mike Little offered to work on the project. They released the first version in 2003. It gained 10,000 users within months. The number of volunteer contributors grew, and...

Flat, Fluid, and Fast
8
eLogistics - Logistics for Ecommerce
8
Work Together Anywhere
8
Designed for Digital
8
Product Management in Practice
9
Taking the Work Out of Networking
8