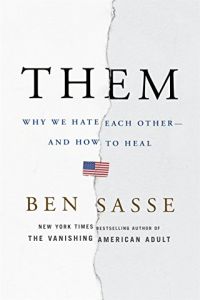 The United States is hurting. Communities are collapsing, and political polarization is on the rise. According to US Senator Ben Sasse, the surprising cause behind America’s growing dysfunction is loneliness – sparked by technology and the decline of traditional person-to-person ties. These feelings of isolation are driving Americans to turn on one another. But, Sasse claims, by rediscovering how to truly connect with one another, rather than just picking sides, America can begin to heal. If you aren’t aware of Sasse’s politics, don’t research his party affiliation or opinions before you read this. If you are aware, and disagree with his political stances, or if you’re rubbed the wrong way by personal details he shares, keep reading. That’s the point. This book is about listening, not politics. It is about learning to communicate with and understand people of different beliefs and backgrounds. Sasse, an engaging storyteller, does a good job of presenting perspectives from both the left and right – thus modeling the kind of interaction he sees as vital to the health of the republic. His examples are American, but his concepts are applicable globally.

Historian Ben Sasse served as Midland University’s president for five years before being elected US Senator for the Republican Party from Nebraska, his home state, in 2014.

Sasse’s starting point is a mixed diagnosis: We are living in the midst of an extraordinary time, he writes, with the digital revolution facilitating change that was unimaginable half a century ago. Americans are more comfortable, wealthier and better connected than at any other time in the nation’s history. Yet a psychological and spiritual crisis is unfolding. The very innovations that have made this ease and prosperity possible have weakened concepts of community, friendship and relationship. People feel increasingly adrift, isolated and without purpose. They lack meaningful connections to neighbors and the sense that they are an essential element in a larger context. Urban sprawl is increasing, lessening people’s sense of belonging to a “we.” Life expectancies are declining, even as medicine improves. Of the three main causes of this downturn – Alzheimer’s disease, suicide and unintentional injuries (including drug- and alcohol-related deaths) – according to Sasse, two point to a devastating truth: People are dying out of despair.

The greatest public-health problem in the U.S., he argues, isn’t heart disease, obesity or cancer: It’s loneliness. Americans’ sense of isolation stands at epidemic levels and will worsen as the population ages. Sasse follows up this hypotheses with evidence: Approximately 20% of Americans see loneliness as a significant source of unhappiness. A third of those over age 45 struggle with ongoing loneliness. The author cites clinical psychiatrists Richard S. Schwartz and Jacqueline Olds, who found out that isolation is a causal issue for many people suffering from depression. But loneliness, Sasse goes on, is not merely a psychological problem; it is also a physical one. People who feel cut off from others suffer more illnesses and are at greater risk for heart attacks, Alzheimer’s and dementia. Sasse points to studies indicating a single day of feeling lonely can hurt our body as much as smoking a pack of cigarettes. Given the toll loneliness can exact, he argues, it is worth evaluating how to remedy America’s “social infrastructure”: people’s connections to one another.

Society
Domestic Politics of the USA