Summary of There Will Not Be a New Cold War 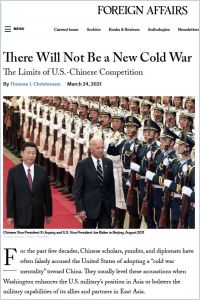 China’s influence around the globe is vast. Yet undertakings such as the Belt and Road initiative underscore that China, unlike the former Soviet Union, is more determined to sell its economic and financial capabilities to other nations than its political ideology. In this instructive essay, professor Thomas J. Christensen draws strong distinctions between current US–China tensions and the post-World War II era to warn the United States against employing a cold war mind-set in today’s geopolitical environment. Christensen’s nonpartisan take is required reading for all students of geopolitics.

Thomas J. Christensen is a professor of international and public affairs at Columbia University.

For various reasons, the current state of affairs between the United States and China fails to rise to the level of a cold war.

Today’s Sino–US competition lacks the essential ingredients of the Soviet–American Cold War of years past. Neither China nor the United States is trying to woo other nations with ideology.

Globalization does not allow for a neat bifurcation of the world into two distinct, rival economic blocs. China and America are not stewarding opposing alliances via proxy wars, as was the case in the mid- to late-20th century. Furthermore, China’s maritime aspirations in Southeast Asia, while parlous, do not equate to the threats that land disputes posed during the 20th-century’s Cold War.

The Sources of Chinese Conduct
7