Summary of Things a Little Bird Told Me 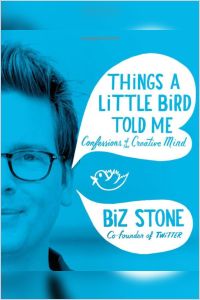 Author Biz Stone co-founded Twitter, a platform that amassed more than 100 million users just a few years after its launch. In this breezy memoir, Stone argues that you can succeed as a tech entrepreneur even without technical chops. A college dropout who was perpetually broke even while working at Google, Stone describes his primary skills as the ability to think creatively and to communicate clearly. He explains his out-of-the-box innovation tactics. getAbstract suggests Stone’s guide to anyone seeking new routes to creative solutions.

Biz Stone is not a programming whiz or a math genius, but as a co-founder of Twitter, he’s a Silicon Valley success story. Stone says that the secret to his success is his uniquely creative approach to problem solving and entrepreneurship. Sometimes he hits a home run; sometimes he strikes out. Born in the 1970s, Stone is a Massachusetts native whose single mother struggled to make ends meet. He won scholarships to attend Northeastern University for a year. Because of his arts prowess, he then got a full scholarship to the University of Massachusetts in Boston.

Stone took a job hauling boxes for the publisher Little, Brown. Artists were just beginning to design book covers in Photoshop, and one day Stone sneaked into the firm’s art department and drew a cover for a book about the Allman Brothers Band. Stone’s work so impressed the art director that he offered Stone a full-time job as a graphic artist, so he dropped out of college.

Stone learned valuable lessons while designing book jackets. For one, covers had to please the designers, the author, the editor, and the sales and marketing departments. The designer might love the jacket, but if...