Summary of Think Tanks, Public Policy, and the Politics of Expertise 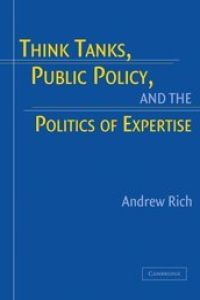 If you study any complex issue being debated in the U.S. Congress or state legislatures, you are likely to find a torrent of reports from independent think tanks. Who are these groups and where did they come from? Good question - and one that political scientist Andrew Rich answers quite thoroughly. This often fascinating study shines its bright light on think tanks, largely overlooked players in the political process. At times, though, Rich’s study tantalizes with generalizations, and then it tends toward scholarly restraint at exactly the moment when the reader wants some juicy details. getAbstract suggests this book to anyone who wants to shape - or really understand - the public debate on complex policy issues.

Think tanks such as the RAND Corporation, the Brookings Institution, the Heritage Foundation and the Progressive Policy Institute have been helping shape American public policy for decades. A think tank is a nonprofit, independent group that uses its research and analysis to influence policy and win financial support.

Think tanks were once neutral but now are more likely to support particular viewpoints. In their early years, these nonprofit enterprises were nonpartisan and flew well below the public's radar. Through the first two-thirds of the twentieth century, the public perceived think tanks as a way to curb the baser instincts of politicians. Social science and public policy became widely accepted fields of study at American universities where academics hoped to train a new breed of experts to seek solutions to the nation's economic and social ills. While nothing is new about how these academic experts weigh in on social and political issues, the role that today's think tanks play in democracy has changed significantly in recent years.

For many years, these bastions of policy wonks remained neutral and...