Summary of Thinking in New Boxes 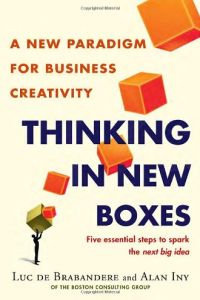 Whenever a company’s leaders gather to brainstorm innovations, someone will urge the group to “think outside the box.” But that’s not enough, say Luc de Brabandere and Alan Iny of the Boston Consulting Group. You must question your existing “boxes” – the categories into which you place information – and envision new ones. That’s what leaders of the BIC company did when they moved their thinking from one box (making disposable pens) to another (making all sorts of disposable products). Writing in an engaging, conversational style, Iny and de Brabandere outline five steps you can take to achieve more innovative thinking. They follow up with a scenario-planning application that invites you to think about how your company might prepare for an uncertain future. The stakes are high, they write, because companies either drive change or have change happen to them. getAbstract recommends this useful guidebook to corporate leaders at any level seeking fresh ways to spur innovation.

Former general manager of the Brussels Stock Exchange, Luc de Brabandere is a fellow and senior adviser with the Boston Consulting Group, where Alan Iny is the senior global specialist for creativity and scenarios. Both lead workshops on ideation, building creative capabilities and envisioning the future.

How many colors are in a rainbow? Most people would say seven, but physics models reveal that a rainbow’s colors are a continuous spectrum. People group the colors into seven bands because that’s easier to understand than an infinite array. That’s one example of how the human mind copes with complexity – by clustering information into mental categories, or boxes. Such boxes help you make sense of the world, but they also can perpetuate biases and outmoded thinking.

Leaders of creativity workshops often urge participants to “think outside the box.” That sidesteps a major revelation: Given how the mind processes information, to be innovative you need a new box entirely.

Holding on to old boxes stifles innovation. Creating new ones energizes it. Consider the BIC company, which achieved success making and selling inexpensive, disposable ballpoint pens. The company could have gone on for years making more innovative pens – all within its existing box. Then came a breakthrough: BIC shifted its mental box from “We make disposable pens” to “We make all kinds of disposable products.” The company went on to make disposable lighters, razors, surfboards...