Review of This Fight Is Our Fight 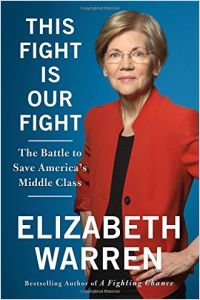 Before Elizabeth Warren became a US Senator, she was a researcher studying the causes of bankruptcy. But, as she shares in this book, Warren’s experience with financial struggle isn’t solely academic: After her father suffered a heart attack when she was 16, her 50-year-old mother took a minimum wage job at Sears to stave off the family’s financial ruin. The Massachusetts Senator uses this story, along those of other Americans, to illustrate why she believes US voters should fight back against the pervasive greed and corruption in Washington, DC that is devastating America’s middle class.

Elizabeth Warren is the senior US Senator from Massachusetts and was a Democratic candidate in the 2020 US presidential election. She is a former professor at Harvard Law School and the author of more than 10 books.

Warren begins her book with a personal narrative. Today, she writes, the federal minimum wage is $7.25 an hour. Adjusted for inflation, this is about 24% lower than it was in 1965. Warren goes on to explain that her own family was saved from financial ruin in the 1960s when, after her father was incapacitated by a heart attack, her 50-year-old mother was able to get a minimum wage job answering phones at Sears. That income was enough to pay the mortgage and keep Warren, her father and her mother clothed and fed. Such a scenario would be impossible today, she states. Despite GDP almost quadrupling between the 1970s and today, income has remained the same while costs have skyrocketed, especially for housing, college and child care – which went up 953% from 1970 to 2015.

Many Americans have not yet recovered from the 2008 recession.

Warren pushes back against the idea that most Americans have recovered from the 2008 recession. Yes, the stock market is up, unemployment is down and inflation has stayed low. But many families now must work two jobs just to survive. To prove her point, she cites a couple of examples. First, Warren introduces a woman she calls Gina (not her real name), who, at age 50, works at Walmart while Darren, her husband, works as a roofer. In the late 2000s they made a combined $70,000 a year; now it’s less than $36,000 a year. They’ve used up their savings making ends meet. Their story is hardly an exception, Warren argues. Nearly one out of four Americans can’t pay their bills on time, and nearly 50% can’t afford to cover an unexpected expense of $400. When Gina finally got a raise after nine years at Walmart, it was a paltry 21 cents per hour.

The Truths We Hold
8
A New Truman Doctrine
8

The New Revolution in Military Affairs
9