Summary of This Is Not Propaganda 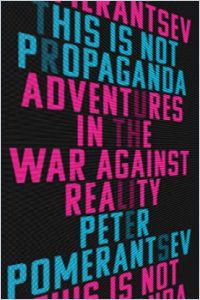 What is the truth? Does it even matter anymore? Information exists in such a superabundance today that it is creating chaos and destroying democratic discourse, argues propaganda and information war expert Peter Pomerantsev. Pomerantsev draws parallels between Soviet-era disinformation techniques and the modern weaponization of information online to explain how the world has arrived at its current moment of crisis: a time when “anyone from anywhere can influence everyone everywhere” and shared understanding of fundamental terms like “democracy” or “Europe” has all but disappeared.

Peter Pomerantsev is an expert on media and disinformation campaigns. He is a Visiting Senior Fellow at the Institute of Global Affairs at the London School of Economics.

A superabundance of information can stifle dissent as easily as censorship.

When Philippine leader Rodrigo Duterte made his bid for the presidency, he hired a twenty-something digital marketer, P, to run social media for his campaign. Duterte relied primarily on a law and order message. He claimed to shoot drug dealers. P created regional Facebook groups focused on local events, and then began posting daily crime stories. He related all of these posts to “drug crime,” which became a focus for the election.

When Duterte came to power, vigilantes and rogue cops inspired by their new president’s anti-drug rhetoric murdered suspected traffickers. Instead of prosecuting these extrajudicial actions, Duterte supported them. He arrested a senator when she opposed the slaughter, and, when the press objected, Duterte called them “presstitutes.” In all these cases he enjoyed robust support via social media. When the online news site Rappler reported the extrajudicial killings, it became a target for death threats. Duterte fans called Rappler “fake news.” The government sued <...