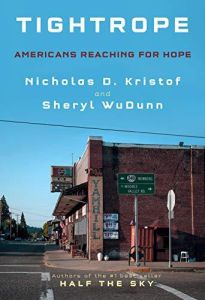 The review below was first published in the getAbstract Journal on Jul 3, 2020.
We’ve reviewed this title for you as we currently cannot offer a summary.

Are We Punishing the Poor?

Nicholas D. Kristof and Sheryl WuDunn, the first husband-and-wife team to share a Pulitzer Prize for journalism, won for their book Half the Sky. They co-wrote the bestsellers A Path Appears, Thunder from the East and China Wakes. Kristof, an op-ed columnist for The New York Times, also won a 2006 Pulitzer Prize for his columns on Darfur. An experienced journalist, WuDunn served at The Times as a business editor and foreign correspondent.

In Tightrope, Kristof and WuDunn detail the United States’ shift from progressive to conservative policies that emphasize personal – not collective – responsibility for individual hardships. They report that a stagnant standard of living has afflicted working-class people in the United States since the 1970s, and it contributes to the first persistent life expectancy decline in the United States in a century. The co-authors weave history and policy analysis into profiles of working-class Americans. They make several policy recommendations, including one striking note: Focus remedial actions on children in poverty.