Summary of Too Big to Fail 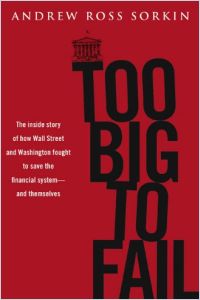 The ever-growing pile of books about the Great Recession holds two kinds of tomes: those that pontificate about what went wrong and what should change, and those that detail the minute-by-minute action in the boardrooms of Wall Street and Washington. This book is the second kind. New York Times reporter Andrew Ross Sorkin, who gained access to many high-level financial players, provides an ambitious, remarkably detailed account of the collapse and bailouts of 2008. He accomplishes two noteworthy feats: He digs up information that wasn’t widely known, and he beautifully writes a page-turning yarn. getAbstract recommends his book to investors, policy makers and businesspeople who seek a clear observer’s perspective on Wall Street’s meltdown.

Andrew Ross Sorkin is the chief mergers-and-acquisitions reporter and columnist for The New York Times. He founded DealBook, an online daily financial report.

Lehman Teeters and Puts All of Wall Street on the Brink

In September 2008, Wall Street and the U.S. economy faced a calamitous collapse. Only a year before, the markets had celebrated eye-popping profits fueled by mortgage innovations. Those in the finance industry rewarded themselves well, garnering “an astounding $53 billion in compensation in 2007.” Goldman Sachs CEO Lloyd C. Blankfein made $68 million. Then the inflated real estate market collapsed, and Wall Street began to teeter. Its debt-to-capital ratio was 32 to 1, a level of risk that guaranteed profits in boom times but proved ruinous in a bad market.

On March 17, 2008, JPMorgan Chase said it would rescue Bear Stearns in a fire-sale deal. Meanwhile, Lehman Brothers, another investment bank, was on the brink of failure. Its derivatives trading partners were skittish and its investors were leery, sending its once-solid stock swinging wildly; shares plunged as much as 48% in an hour of trading. Although Lehman CEO Richard S. Fuld Jr. was responsible for the firm’s risky approach, in some ways it didn’t fit his usual style. Even as he had ramped up risk, Fuld had occasionally reminded his people that his approach...