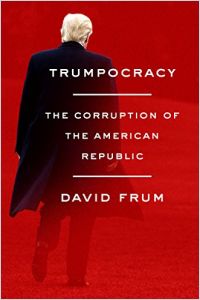 Conservative David Frum lodges complaints against Donald Trump that prove almost identical to the criticisms put forth by left-leaning Trump opponents. In this crisp takedown, Frum accuses Trump of endangering US democracy. A former aide to President George W. Bush, Frum sees little to like in Trump’s administration. In Frum’s assessment, Trump enriches himself, flouts decades-old rules against Oval Office nepotism, unfairly marginalizes the media, and lies about anything and everything. While harsh, this reasoned analysis of Trump’s presidency from an unexpected source will intrigue voters and political enthusiasts.

David Frum is senior editor at The Atlantic and the author of nine previous books, including The Right Man, Dead Right, How We Got Here: The 70s and An End To Evil.

Frum regards President Trump as punishing, unforgiving, self-centered, ill-informed, indolent, greedy and deceitful. As more books opposing Trump appear, Trump seems increasingly immune to traditional attacks. But Frum offers a laundry list of offenses: Trump refuses to release his tax returns and continues to operate his for-profit businesses, raising the unseemly possibility of conflicts of interest. Trump values personal loyalty above competence and experience, a bias the president has used to hollow out the government bureaucracy. Trump cozies up to dictators and refuses to acknowledge the rightful role of an impartial judiciary or an unbiased media.

These aren’t merely character flaws, Frum argues, but an assault on US democracy itself. For all his shortcomings, Trump has used his keen political instinct to seize power by capitalizing on the shortcomings of the political elite. In so doing, he’s flummoxed the American power structure. While Trump is unlikely to shred the US Constitution openly, Frum argues that he threatens to paralyze government quietly. Trump’s dramatic coarsening of US political culture has created an environment wherein the state need not rule with an iron fist. Instead, Frum asserts, Trump has proven expert at using non-governmental means to cow his opponents and embolden his supporters.

Trumpocalypse
9
It’s Even Worse Than You Think
8
Does mail-in voting lead to fraud – and does it help Democrats? The facts
8
Confronting Iran
7
The Billion-Dollar Disinformation Campaign to Reelect the President
9