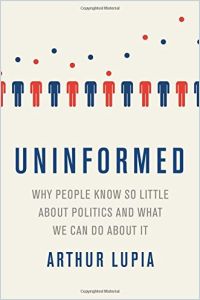 Political scientist Arthur Lupia’s intriguing study argues that the human brain isn’t really designed to take in new information. It won’t adapt to information that doesn’t comply with its preconceived biases. While you may be tempted to think of the latest partisan discord as new and unusual, it turns out that everyone might be hardwired with some degree of ideological stubbornness. Lupia aims his message at a group he calls “civic educators” – teachers, journalists, religious leaders, and others. While always politically neutral, getAbstract recommends his manual as a useful guide for communicators, teachers and managers seeking insight into how people learn and listen and what information they will accept or reject in these polarized times.

Arthur Lupia, a professor of political science at the University of Michigan, chairs the National Research Council Roundtable on the Communication and Use of Social and Behavioral Science. He has written extensively in the field and is the co-author of The Democratic Dilemma.

A Flood of Political Facts

The American political system creates a veritable flood of information, laws and rules – an inundation of documents to debate, to understand and – for most people – to ignore. In a typical year, Congress proposes 4,000 bills, 200 of which become law. Each state’s legislature proposes bills and creates laws at a similar clip. Cities pass local ordinances. Federal agencies create rules and regulations at a torrid pace.

If that’s not enough to track, consider the flood of potentially precedent-setting court filings. Plaintiffs file civil suits in US federal courts at a rate of more than 200,000 cases a year. Even experts in politics can master only a tiny fraction of the rules that govern US citizens. Amid this heavily regulated reality, you’ll find two types of Americans: those who know how little they know and those who delude themselves into believing that they’re knowledgeable.

As if the sheer volume of information isn’t daunting enough, human biology hampers people’s ability to learn. Human beings generally aren’t open to learning new information that goes against their...