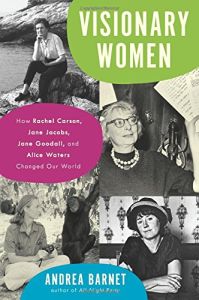 Four women in separate fields – marine biologist Rachel Carson, journalist Jane Jacobs, conservationist Jane Goodall and chef Alice Waters – came to similar views about the natural world’s contribution to healthy and happy humans. Their ideas were radical in their day, but have become mainstream. Biographer Andrea Barnet presents these women, the experiences that shaped their ideas and their culture-shifting philosophies in one evocative volume.

Life at the seashore fascinated Rachel Carson. Trained as a biologist, she worked for the US Fish and Wildlife Service to support her mother and nieces. She edited field reports and developed an understanding of the fragile interconnectedness of all marine life. An essay she wrote for The Atlantic led to her first book contract.

Carson heard warnings about DDT in 1945. By 1957, people complained about federal planes spraying their neighborhoods with it. In Duxbury, Massachusetts, residents observed that insects survived, but birds were dying agonizing deaths. They died from eating worms that ate sprayed leaves. Once introduced into the environment, DDT persisted. Carson realized that ...

Andrea Barnet also wrote All-Night Party: The Women of Bohemian Greenwich Village and Harlem, 1913–1930. She was a finalist for the prestigious PEN/Bograd Weld Prize for Biography.

Questions Are the Answer
8

Get People to Do What You Want
9