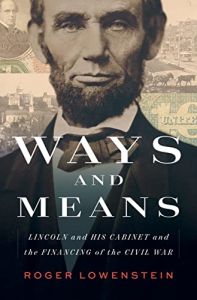 Lincoln and His Cabinet and the Financing of the Civil War

The review below was first published in the getAbstract Journal on May 25, 2022.
We’ve reviewed this title for you as we currently cannot offer a summary.

How the Greenback Beat Dixie

Bestselling economic historian Roger Lowenstein details the fiscal strategies that created the US dollar and won the Civil War.

Today, everyone takes paper money for granted. But in 1860, the notion of currency backed by nothing more than the full faith and credit of a government seemed far-fetched, acclaimed journalist Roger Lowenstein reports in this intriguing history of the origins of the US fiscal system. During the Civil War, the North’s adoption of a centralized currency and an income tax – and the South’s inability to follow suit – proved decisive to the war’s outcome, the end of human enslavement in the United States and the nation’s economic development. Lowenstein offers a fascinating, in-depth look at how competing 19th-century economic philosophies transformed the United States’ future.

Lowenstein describes how, in 1860, the US federal bureaucracy reflected Founder Thomas Jefferson’s vision of a hands-off government.

Origins of the Crash