Summary of We Have Been Harmonised 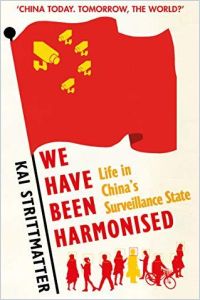 China observers have long hoped that technology and capitalism would drive the country toward greater openness and freedom. Kai Strittmatter, a fellow at the Mercator Institute for China Studies in Berlin, swiftly punctures that delusion in this deeply researched, compulsively readable report from the front lines of China’s descent into dystopia. Strittmatter shows how the authoritarian regime, far from embracing reform, is leveraging its formidable technology arsenal to monitor and control its citizens in nearly every aspect of life and conscripting capitalism to serve the state.

Kai Strittmatter is Scandinavia correspondent for Süddeutsche Zeitung and a fellow at the Mercator Institute for China Studies in Berlin. He has worked in Beijing for over a decade as a foreign correspondent.

In 2016, after an artificial intelligence (AI) system named AlphaGo beat South Korean champion Lee Sedol four to one in a five-game Go tournament, China’s scientific community, recognizing the technology’s potential, began reorienting their work toward AI. The following year, Beijing announced its intention to make China the world’s leader in AI by 2030 and has invested heavily to obtain the talent and resources needed to make that happen. Companies that develop AI – and firms that gather the data to feed such tools – have become giants in China, thanks to government support and a lack of constraints that hamper companies in other countries.

The role of AI and big data in China goes far beyond things like predicting traffic flows. Take China’s popular bicycles for hire. The company managing these bikes not only records payment and location data for millions of bikes, but it also performs analysis to identify who is riding where, how fast and with whom. The Chinese regime sees AI as an important part of the nation’s economic prosperity, but it’s ...

Without Democracy, China Will Rise No Farther
7