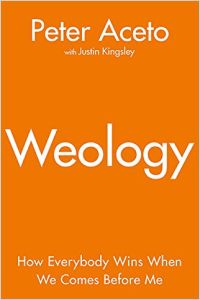 Tangerine, Canada’s most idiosyncratic bank, has no branches, and all its operations are digital. Writing with journalist Justin Kingsley, CEO Peter Aceto does a great job of telling the bank’s story and explaining his unique take on being CEO. He provides an insider’s view of the revolutionary bank that’s changing the rules for all financial institutions. Aceto teaches valuable lessons about customer relations based on his “Weology” philosophy. He says the bank (“We”) benefits when its clients and employees (”Me”) benefit, and vice versa. While his information serves his company well, he offers an intriguing outlook and a warmly readable story. getAbstract recommends this corporate biography to entrepreneurs and businesspeople who value lessons from successful outliers.

Peter Aceto  is the president and CEO of the Canadian bank Tangerine. Justin Kingsley  is a writer, creative strategist and photographer.

Peter Aceto is CEO of Toronto-based Tangerine – formerly ING Direct Canada (the bank changed its name in 2014) – but he is not a banker. He was the bank’s first lawyer when it opened in 1997 and later became CEO.

His office sits out in the open with no doors or walls. Tangerine staffers can enter his workspace whenever they want. He spends time at Tangerine’s call center so he can speak on the phone with “clients” – his designation for the bank’s customers. Aceto meets clients and potential clients face-to-face at Tangerine’s coffee lounges and plays “shinny hockey” with staffers.

Aceto is so informal that some employees call him Pete. Unlike most CEOs, he doesn’t have a reserved parking spot at headquarters. He circles the lot, finds a parking place and strolls to the office like other employees. He encourages Tangerine business meetings to start with companionable conversation about people’s lives outside work.

Aceto become CEO at age 39. After his first year on the job, he asked all Tangerine employees to vote on whether he should remain as CEO or leave. He gave out anonymous ballots that read: “‘Peter should stay’ or ‘Peter should resign...