Summary of What Happens in Sudan Doesn’t Stay in Sudan 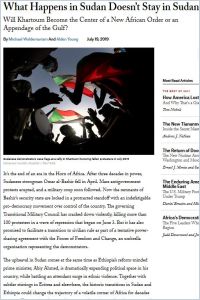 As large parts of Africa have been moving toward more democratic forms of government, the Horn of Africa has stayed behind. Yet the emergence of a strong pro-democracy movement in Sudan, which led to the toppling of the country’s long-time dictator Omar al-Bashir, has raised hopes for Sudan becoming not only a democracy itself but also a model for neighboring states to emulate. Yet as scholars Michael Woldemariam and Alden Young explain, Sudan still has a long way to go. They explain what’s at stake for the country and the region as a whole in an informative opinion piece.

The end of Omar al-Bashir’s 30-year rule represents an opportunity for Sudan to embark on a transition to democracy.

In April 2019, a wave of anti-government protests forced the ouster of Sudan’s dictator Omar al-Bashir. The military subsequently took control of the government but eventually agreed to a power-sharing arrangement with the opposition democracy movement as part of a three-year transition to civilian rule.

The political visions the two sides represent are symptomatic of a broader ideological struggle affecting the Horn of Africa: a competition between authoritarianism, as favored by regional influencers Saudi Arabia and the United Arab Emirates; and democracy, as promoted by the African Union. The African Union, which has suspended Sudan’s membership following...