Summary of What Technology Wants 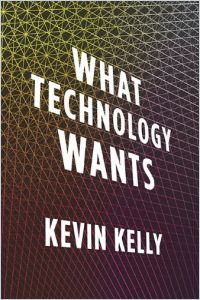 In this fascinating book, Kevin Kelly, a co-founder and executive editor of Wired magazine, draws on a broad range of disciplines to make synthesizing observations about the relationship of technology to life. Unlike many contemporary writers, Kelly uses the term “technology” broadly. He isn’t just talking about the newest electronic gadgets; rather, he traces a history that reaches from chipped stone tools to the latest tech toys. Most readers will find some places where Kelly’s argument goes too far or slides past an objection, but anyone who dips into his treatise will find it compellingly written and vastly intriguing. getAbstract recommends this thought-provoking work to futurists, planners, innovators, and those interested in human nature and history.

Kevin Kelly, co-founder and executive editor of Wired magazine, also wrote Out of Control and New Rules for the New Economy. He runs the Cool Tools website where readers review gadgets.

Technology is so much a part of daily life that people take it largely for granted. Broadly defined, technology has driven humanity for thousands of years. The ancient Greeks used the term techne to name the human qualities of “art, skill, craft” and “ingenuity.” Language, law and culture are the “soft” technologies that have distinguished and guided societies. “Hard” technologies, ranging from the flint ax to the plow to the internal combustion engine and the computer, have reshaped the planet itself. This growing complex of invention and achievement is the technium, “a self-reinforcing system of creation.” As technology becomes more pervasive, intrusive, powerful and, soon, intelligent, people must consciously assess their relationship to technology. The technium has a life of its own, spurred by human impulses and desires.

From Old to New