Summary of What the F 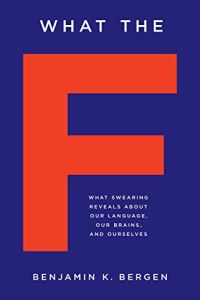 Benjamin K. Bergen, professor of cognitive science and director of the Language and Cognition Laboratory at the University of California, San Diego, attempts a cognitive, cultural, historical and linguistic consideration of profanity. He explores the taxonomy of cursing, its grammar, and its cultural and linguistic uses, delving into how it evolved and continues to evolve. He explains how cursing affects the person using it and the person – and society – perceiving the curse. Bergen writes perceptively about how slur-based curses – those attacking a person’s identity – cause harm. Though Bergen attempts a Malcom Gladwell–style exploration of his subject, he occasionally loses his way or seeks a jocular tone at odds with his material. Still, his appreciation for and willingness to analyze cursing seems boundless. He derives fascinating conclusions about cursing’s place in grammar, society and language. getAbstract, which recommends his exploration of the entire range of curse words to those interested in language, follows professional guidelines regarding polite language, so any time you read the word “damn” here, please imagine the most obscene word that springs to mind. Bergen knows them all and revels in their usage.

Benjamin K. Bergen is a professor of cognitive science and the director of the Language and Cognition Laboratory at the University of California, San Diego. He publishes in his field’s top journals, as well as with HuffPost and Psychology Today. He is also the author of Louder than Words: The New Science of How the Mind Makes Meaning.

“Profane words are just words.” But they’re “bad words,” and that gives them power. Profanity functions differently than other language, and the brain encodes it in specific ways. Profanity reveals aspects of language and perception in a way that other types of words can’t. When you shout, “Damn!” after you bang your thumb with a hammer, you access a part of your brain that the rest of the language doesn’t utilize.

Profanity both expresses your hurt and hurts others. Profane – the opposite of “sacred” – words are taboo. They are forbidden. They “increase sexual arousal.” What they describe isn’t taboo, but describing such matters in a profane way is. Studies from New Zealand, Great Britain and the United States indicate marked similarities in which words people consider the most offensive. They also suggest that English profanity derives from four categories of words.

The first category is “blasphemy.” The Latin word profanus means “outside the temple.” Early on, profane words addressed aspects of life deemed inappropriate to discuss in a holy setting. The next category...

Everybody Lies
8
Rule Makers, Rule Breakers
8
Breaking the Silence Habit
8
This Is Why We Can’t Have Nice Things
9
Orbán
7
You Were Born to Speak
8