Summary of When Cultures Collide 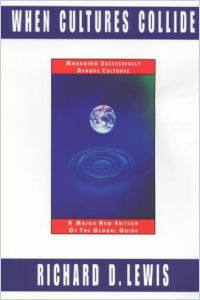 Richard D. Lewis, an expert on cross-cultural and language training who has tutored clients from Swedish corporate executives to the Japanese Imperial Family, discusses the need to consider cross-cultural differences in managing any company in today’s global world. He suggests a broad model you can use to characterize different national characteristics as linear-active, multi-active, and reactive. These traits shape attitudes toward time, leadership, team building, and affect a range of organizational behaviors. Lewis includes brief national profiles you can refer to when doing business away from home. This in-depth book covers common patterns in different cultures, and offers many examples of how different groups act under different situations. getAbstract recommends this book to top executives, managers and anyone who works in a multicultural business environment, as well as to general readers with a yen for informed people watching.

Richard D. Lewis is chairman of Richard Lewis Communications, an international institute of cross-cultural and language training. His clients include Deutsche Bank, Mercedes Benz, BMW, Fiat, Gillette, Pfizer, Andersen Consulting, Nestle, Nokia, Volvo, Saab, IBM and a dozen government industries. He spent five years in Japan, where he was the tutor for the Empress Michiko and other members of the Japanese Imperial Family.

The Vast Diversity of Cultures

While everyone shares certain basic concepts, people from different cultures see these concepts from different perspectives and behave differently as a result. That’s why you may think that someone is behaving irrationally or even violating certain values you hold sacred, while - instead - they are behaving quite responsibly from their own point of view.

These cultural differences in behavior are rooted in very different core beliefs and assumptions about reality that vary from nation to nation. You even will find major differences between certain regions and certain cities. Other differences derive from corporate cultures, which are particularly strong in certain countries, such as Japan, while family culture is especially important in other countries, such as Italy, Spain and China. In some countries, individualistic views are more highly valued, such as in Britain, France, Australia and the U.S. You also need to consider the big cultural divide based on gender; men and women really do experience different cultures in each country.

Outward mannerisms and manners are only a superficial...