Summary of When Will We Want to Be in a Room Full of Strangers Again? 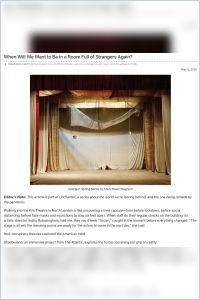 Live theater has become a casualty of the global pandemic. Productions are shut down and when or how they’ll reopen remains unclear. Theater institutions, large and small, fear financial catastrophe. Helen Lewis reports in The Atlantic on the struggles of performers, writers, staff and audiences members. Will theater become less innovative and adventurous? Will ticket buyers be fewer in number and increasingly wealthy? And how will both government-subsidized and commercial sectors of the theater industry fare in the uncertain and challenging future?

The coronavirus pandemic poses a potentially existential threat to the theater and the arts that depend on it.

No one knows when theaters will re-open or what reopening might look like. Will a return to the shared space of a live performance be possible by spring of 2021? Many theater organizations report that they won’t be able to last that long without major financial support.

Take, for example, London’s West End theater industry, which is usually an economic boon to Great Britain. Its artistic influence and contributions ripple out to the worlds of the arts and entertainment. The shutdown is inflicting heavy financial damage to even the largest theatrical companies and devastating smaller regional and experimental companies.

Underneath the uplifting language [of the Arts Council] – ‘through creativity and culture, we will heal’ – the message was clear: We can’t save you.

The money hit is particularly hard on theaters which depend on government support. The Conservative Party, now in control in the United Kingdom, has historically frowned on largesse to the arts. The Arts Council states clearly that it does not have the budget to support the theater sector through an extended closure. To survive, some theaters have pivoted beyond their artistic brief: instead of making costumes, they’re sewing masks for health workers. Some are getting into the delivery business or providing space for blood donations.

The pandemic raises creative challenges, such as how to build and keep an audience in a time of social distancing.

Many theaters are recording their productions for home viewing. Some are experimenting with live versions of monologues. Actors – at home and doing their own hair and make-up – are performing solo for the camera. The National Theatre put its archive of performances on YouTube. These strategies may be effective for organizations with deep pockets and a library of existing material, but smaller entities cannot adopt many of these methods.

If grassroots theater dies, what else dies with it?

Theater people are suffering the absence of the key element that makes their craft a compelling experience: creating a live performance in a shared space. Even the most well-known theatrical companies aren’t likely to find that someone watching at home will pay ticket prices that have increased 30% since 2012.

The theater shutdown may have long-term consequences for the industry.

Dark theaters mean losses for their companies and for the performers and “casual” staff who make the enterprise function. While wealthy and established producers, directors and performers can weather the storm, many younger and less well-off players and industry participants may leave it for good.

Money, and sympathy, are finite.

If the closure continues into the 2020 Christmas holiday season, which usually brings in the most diverse audience of the year – young and old, regulars and first-timers – an entire generation of potential theater-goers may never develop an attachment to the art form. The theater audience is likely to increasingly skew elderly, wealthy and exclusive.

When they reopen, production companies may become more risk averse about the programs they decide to bankroll. They could prefer the tried and true – with box office stars – over the experimental and new or unknown. The industry is anxious about the prospect of reopening too early, because no one knows when audiences will be ready to come back. Social-distancing requirements call for half-empty houses, which won’t generate a return on investment without outrageous and possibly unsustainable ticket price increases.

Comedy is fine, but catharsis is essential. – Michael Grandage, director

Smaller casts can make productions less expensive, and revivals are easy to market. But exclusive reliance on those approaches would restrict producers, directors, actors and contemporary writers. Will returning audiences want to see theater that addresses the current crisis or will they seek lighter, escapist fare? In the United Kingdom, with the Arts Council emphasizing “relevance” over “excellence,” many in the theater world worry that upcoming productions may constitute an onslaught of grim and mediocre offerings.

A London-based staffer for The Atlantic, Helen Lewis wrote Difficult Women: A History of Feminism in 11 Fights.