Summary of When Words Trump Politics 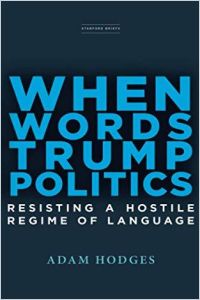 How much does a politician’s rhetorical style matter? According to linguistic anthropologist Adam Hodges, the link between language and power is fundamental: By leading the way in how the media and electorate discuss and debate ideas, a leader can systematically obstruct the truth. Hodges’ book takes a close look at the rhetorical techniques Trump and his associates use to promote a politics of division and lies. The author leverages those discrete examples into larger arguments about why language matters for political power and why the electorate must stay informed to preserve democracy.

Adam Hodges received his PhD in linguistic anthropology from the University of Colorado Boulder and has taught at Carnegie Mellon University. He is a regular contributor to Anthropology News and the author of The ‘War on Terror’ Narrative (2011).

The electorate must understand political issues and how language shapes public discourse.

President Donald Trump certainly has a way with words. His divisive, populist rhetoric, although unusual and, according to some, not befitting the highest office in the land, found purchase with American voters and propelled him into the White House in 2016. That bombastic language – often peppered with personal insults, racist statements and conspiracy theories – has continued since Trump took office, both in speeches and on Twitter.

Trump’s rhetoric has exploited, and worsened, political divides in the United States. An informed electorate is the only way to uphold democratic ideals and protect the state from demagoguery. Staying informed does not only mean keeping up with the news; it means grasping the ways Trump, and others in his administration, use – and abuse – language to shape how elected officials, the media and the citizenry discuss and debate important issues. Only through such understanding can the American people overcome political divisions and achieve bipartisanship.&#...